The Valkyries will be heading to Butte for the Class B State Basketball Tournament after going 2-1 to earn second at the Western B Divisional tourney over the weekend.

The Bigfork girls picked up wins over Anaconda and Thompson Falls before falling to Loyola Sacred Heart in the championship game Saturday evening.

The Valkyries will open state tournament play in Butte at 5 p.m. March 12 as they take on the runner-up of Southern B Divisional Tournament, which will be played in Billings this week.

The Valkyries built a five-point lead after one quarter against Anaconda in the opening round of divisionals Thursday and used that momentum to earn an eight-point win as they downed the Lady Copperheads 57-49. Bigfork led 36-32 after three quarters, but outscored Anaconda 21-17 in the fourth quarter.

The Valkyries got a big basket from Edgerton with 29 seconds to play and Santistevan put in two crucial free throws with 7.5 seconds remaining Friday as Bigfork won a thriller over Thompson Falls in the semifinals, 47-46.

The teams were knotted at 31 at the half, but defense ruled the third quarter as the Valkyries scored only three points, but still took a 34-33 lead into the fourth quarter.

Bigfork committed 14 turnovers in the game to the Lady Bluehawks’ eight but the Valkyries dominated the rebounding battle 35-22.

The Valkyries found themselves down 24-8 at the half against the Breakers in the title game Saturday and could not recover as Bigfork had to settle for a second-place finish.

Edgerton led the Bigfork effort with 16 points while Berreth had five and McAnally added four points.

The Vikings opened their run at the divisional tournament with a win over Anaconda before falling to eventual champion Arlee and then Thompson Falls.

The Vikings jumped out to a 14-9 lead after eight minutes against the Copperheads but took only a one-point lead into the half, 20-19. The game continued to be tight down the stretch, but Bigfork outscored Anaconda 19-15 in the fourth to pull away in the final minutes.

Isak Epperly led the Vikings with 18 points while Walker Fisher added nine and Isaac Bjorge finished with eight points and a game-high 14 rebounds.

The Vikings fell victim to the eventual tournament champion Arlee in the semifinals as the Warriors picked up an 11-point win. After going 0-8 in district play and finishing fourth in their district tourney, the Warriors looked like a different team in Hamilton as they took a 24-21 lead over Bigfork at the half. The Vikings managed just four points in the third quarter as Arlee built a 34-25 lead en route to the win.

Colt Thorness finished with 11 points, five rebounds and two blocks to lead Bigfork in the loss while Bjorge added six points and Epperly and Fisher each scored five.

The Vikings lost a heartbreaker in their final game of the season Saturday, coming up just short against Thompson Falls. Bigfork trailed 10-7 after one quarter but rallied to grab a 17-16 lead at the half against the Bluehawks. The teams were tied at 22 after three quarters of play. 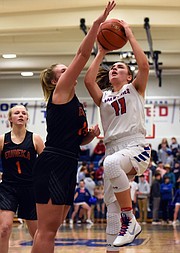 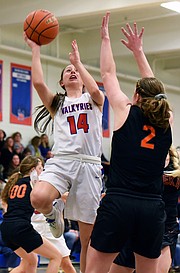