The Mission bench celebrates as time expires during their 47-44 win over Bigfork at Bigfork High School on Thursday. (Casey Kreider/Daily Inter Lake)

The Vikings and Valkyries will both enter the Western B Divisional Basketball Tournament as No. 3 seeds after splitting a pair of games in the district tournament last week.

The boys will open divisionals at 10:30 a.m. in Hamilton Thursday as they take on Anaconda while the girls will play their opening game at 8 p.m. Thursday, also against Anaconda.

The Vikings took a one-point lead into the fourth quarter at home against Mission last Thursday in the district semifinals, but could not hold on down the stretch as the Bulldogs escaped with a three-point victory.

Bigfork shot 40 percent from the field in the loss, but went just 3-21 from three-point range and made only three of eight from the charity stripe.

The Vikings jumped out to a 15-9 lead after one quarter of play, but were outscored 18-6 in the second quarter as Mission grabbed a 27-21 halftime advantage. Bigfork rallied to take a 33-32 lead into the final eight minutes.

The Vikings used a 30-16 second-half rally to get past Thompson Falls to take third place at the district tournament in Libby Saturday as Gilliard poured in 11 points with 10 points each from Epperly and Thorness.

After leading by one at the end of the first quarter, the Vikings found themselves down 20-15 at the half before finding their offense in the second half.

Bjorge was once again a force all over the court with six points, nine rebounds and four blocks while Reichenbach and Fisher each scored three points and Wyatt Duke added two.

The Valkyries suffered a close loss in their opening game of the district tournament in Bigfork Friday, falling to the Lady Lions by three.

Rebounding and bench scoring were the difference in the game as Eureka pulled down 30 rebounds to Bigfork’s 19 while the Lady Lion reserves outscored the Valkyries 18-6.

The Valkyries bounced back with a convincing win over the Lady Bulldogs at the district tournament in Libby Saturday, grabbing a 31-9 halftime lead en route to downing Mission by 28.

Bigfork dominated the glass, out rebounding the Lady Bulldogs 46-30, including a 33-17 advantage on the defensive end.

Edgerton’s double-double of 19 points and 10 rebounds led the way for the Valkyries while Berreth added 14 points and eight boards. Nadeau had eight points, Santistevan added five, Chappuis, Buenz and Zoey Albert each scored two and Jessica Newton had one point. McAnally finished with seven rebounds and five steals in the win. ■ 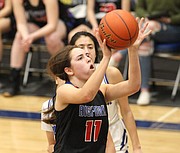 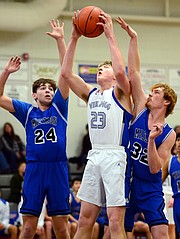 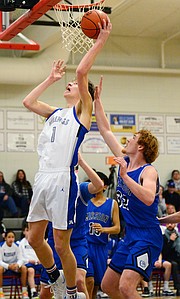 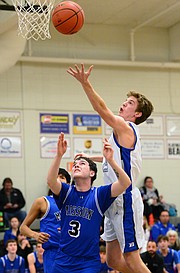 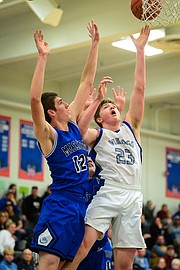 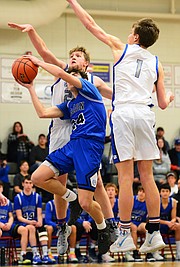